Numbers to Avoid in the Grocery Store: Sweeteners When walking Down aisles of the grocery store, it can be difficult to find foods that are actually healthy. In Australia and New Zealand, we see numbers in our ingredient labels. If a product has a food additives such as preservatives, sweeteners, emulsifiers, antioxidants for increased shelf life and artificial ingredients you may see a few numbers scattered around the ingredient label.  Many companies opt for the number as it looks less threatening then Butylated hydroxytoluene (number 321) a long hard to pronounce chemical sounding name.

The question is what numbers are safe and which ones should be avoided.

Food Standards Australia New Zealand FSANZ has a list of these numbers, but which ones are actually safe and not linked to behavioral or carcinogenic research is not noted. In fact, the US has an acronym: GRAS Generally Recognised as safe. Generally safe? It's safe to say most parents would prefer Definitely safe! DRAS.

Not all additives are created equal, and some are actually considered possible known carcinogens from animal studies.

Today we are focusing on artificial sweeteners. If you see a 900 number it is a sweetener. Artificial sweeteners have been around for a long time to reduce calories in foods and beverages. Not all are bad, but some have research showing they cause tumours in rats and others contain toxic compounds that should definitely not be added to our bodies daily.

Here are 4 artificial sweeteners still allowed in Australia. In fact many of them are on every table of your favourite cafe.

Aspartame (951) is also known equal, the little blue packets you see at cafes. Also found in diet sodas, no sugar foods and drinks, chewing gums, candies and even yoghurt. Aspartame has a long list of research articles explaining the negative effects of using this low-calorie chemical sweetener. The most noteworthy is the three compounds that create aspartame: phenylalanine, aspartic acid, and methanol. When measured; individuals with cancer, HIV and sepsis all had higher than average levels of phenylalanine. Then there is methanol which breaks down to formaldehyde in the body. Then there is the link to cancer, overall this is the one to avoid at all costs!

Cyclamate (952) is an artificial sweetener that tastes most like natural sweeteners and is often added to Sodium Saccharine to make a balanced artificial sweetener. Cyclamate is actually banned in the UK, Canada, Japan and the US in fact 45 countries ban it as animal studies linked it to bladder cancer. It is allowed here in Australia and although FSANZ found it safe, it may be good to avoid this one as well.

Sodium Saccharine (954) also known as sweet n’ low in the little pink packet. Sodium Saccharine is found in toothpaste, children’s medicines and gum has shown to cause cancer in rats as well as cause digestive issues in humans. With the research now on gut health and modern disease, it's important to avoid any foods or additives that negatively affect gut health and instead add more fermented foods, whole food fibres and green vegetables.

Sucralose (955) is also known as Splenda in the little yellow packet was first created as an insecticide. Approved for use in 1998, Sucralose is a chlorinated sucrose derivative. This means it’s derived from sugar and contains chlorine. Linked to weight gain, leaky gut and diabetes, this artificial sweetener has nothing good to offer, so best to avoid at all costs especially for little kids with little bodies and organs.

Many additives especially artificial sweeteners are shown to cause tumours in rats, but these animal studies don't always translate to humans, therefore, these ingredients are deemed safe by regulatory boards. Truth is it is unethical to research unknown ingredients and their long-term side effects of humans, especially children. So err on the side of safety, stay clear of chemical sweeteners that may be safe now but could be labelled true carcinogens in the near future. 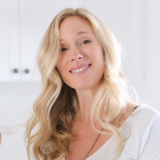 Kristin Derrin is a certified nutritionist, health practitioner, mum and the founder of June Superfoods, a range of certified organic kids superfood supplements that contain natural fruit and vegetable nutrients to support kids growth and development naturally. Kristin created June Superfoods after noticing a gap in the market for high-quality organic health products for kids. This prompted her to create a product with the highest quality organic ingredients; no added sugars, fillers, or anything artificial.

Comments will be approved before showing up. The Secret to Optimal Health How to choose the best yogurt in the grocery store

Sign up to get 10% off your 1st order. Specials, nutrition tips, recipes and more...